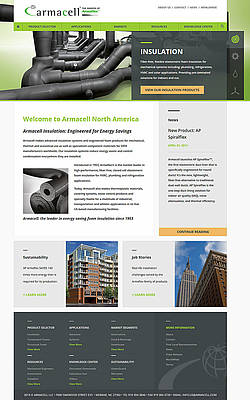 Armacell Recognized by AVIA with two Silver Awards of Distinction.

The winners of the 2015 Communicator Awards have been announced by the Academy of Interactive and Visual Arts.  With over 6000 entries received from across the US and around the world, the Communicator Awards is the largest and most competitive awards program honoring the creative excellence for communications professionals.

The Communicator Awards are judged and overseen by the Academy of Interactive and Visual Arts (AIVA), a 600+ member organization of leading professionals from various disciplines of the visual arts dedicated to embracing progress and the evolving nature of traditional and interactive media.  Current IAVA membership represents a "Who's Who" of acclaimed media, advertising, and marketing firms including:  AirType Studio, Condè Nast, Disney, Keller Crescent, Lockheed Martin, Monster.com, MTV, rabble+rouser, Time Inc., Tribal DDB, Yahoo!, and many others.