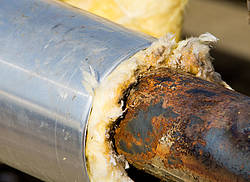 ArmaFlex is the only insulation system to achieve the top rating in a demanding CUI test and emerges as the clear winner of the independent investigation. The renowned corrosion institute InnCoa examined the capacity of five commonly used insulation systems to mitigate corrosion under insulation. The results are further confirmation of the excellent experiences which have been made with Armacell’s elastomeric insulation materials around the world for decades.

The two-trillion-dollar problem
Corrosion costs the world economy around 3.4 % of the annual global gross domestic product. That is 2.5 trillion US dollars. Some 40 % of world steel production is used to replace parts destroyed by corrosion. In Germany alone, corrosion destroys technology and infrastructure to the value of 75 billion euros annually. Not only the oil and gas industry is effected, billions of euros worth of damage also occurs in the chemical, pharmaceutical and food sectors every year.

Independent test by renowned corrosion specialists InnCoa
To what extent can insulation systems reduce the risk of corrosion? This was the question investigated by InnCoa, an institute based in Neustadt/Donau (Germany) which is specialized in corrosion testing. In the test, five commonly used insulation systems were installed on pipes and subjected to high humidity and a high ambient temperature for 65 days. Because the risk of corrosion is particularly high on equipment operated at dual temperatures, the circulating water flow was adjusted in a 24-hour cycle between 5 °C and 80 °C. InnCoa tested flexible elastomeric foams (FEFs) as well as insulation systems made of glass fibre, polyurethane and stone wool. At the end of the test, the insulation materials were dismantled and the surfaces of the specimens examined and classified according to EN ISO 10289. The corrosion protection ability is assessed with the degree of protection, RP, on a scale of 0 to 10. An RP rating of 10 means 0 % of surface shows corrosion or other defects (best rating).

Corrosion protection ratings of the various insulation systems
The two FEF insulation systems performed best in the test: the elastomeric foam with all-over adhesion even attained the top rating, RP 10. No signs of corrosion were found anywhere on the surface of the pipe. All-over adhesion of the insulation materials further increased the already high corrosion protection of FEFs. The glass-fibre insulation system, on the other hand, only had an RP of 4 to 5 and the polyurethane system achieved an RP of 5. The greatest corrosion damage was observed on the stone wool specimen. The surface area of defects was between 5 and 10 % of the total pipe surface, resulting in an RP of 3.

Long service life of elastomeric insulation systems
The test demonstrated impressively that closed-cell flexible elastomeric foams which have an ‘integrated vapour barrier’ can reduce the risk of corrosion. The results confirm the excellent experiences that have been made with ArmaFlex insulation materials throughout the world for decades. As is often noticed during maintenance work, equipment insulated with ArmaFlex displays no sign of corrosion even decades after its installation. To ensure that the insulation system works reliably for many years, it is not only essential that the insulation thickness is calculated correctly and system-compatible accessories are used, but also that the materials are installed professionally following the manufacturer’s instructions.