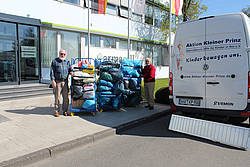 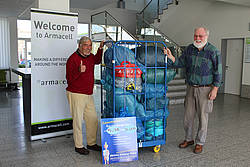 Münster, 21.04.2015 - The charity "Aktion Kleiner Prinz" asked Armacell for support: they urgently needed clothing for needy people in Romania. The Armacell employees in Münster promptly responded to the call and provided active support. They donated clothing and shoes over two whole days in April at the at the company's site in Münster.

Günter Ellger, a trustee for "Aktion Kleiner Prinz" and responsible for their activities, accepted the donations at Armacell on 21st April.

"We are delighted by the willingness of Armacell to cooperate," Ellger commented. "This is the second time that we have received the support and commitment of the company's employees. And we are already jointly planning future activities."

Aktion Kleiner Prinz was founded in 1993 and aims to help children around the world who are the victims of war, violence, persecution and disasters. Its projects range from emergency aid to long-term involvement in many of the world's crisis areas. They regard a close and trustworthy contact with local project partners as very important. The charity operates on a voluntary basis and has administrative costs of below 5%, i.e. 96 Cents in every Euro benefits a child. They have also been awarded the official donation seal DZI on an annual basis.